My next entry in the Peruvian Wine Journey is a pink Malbec rosé, the Paz-Soldán Conde de la Conquista Selecta “Ana Maria” 2021. This one comes from Arequipa, Peru’s second-largest city. 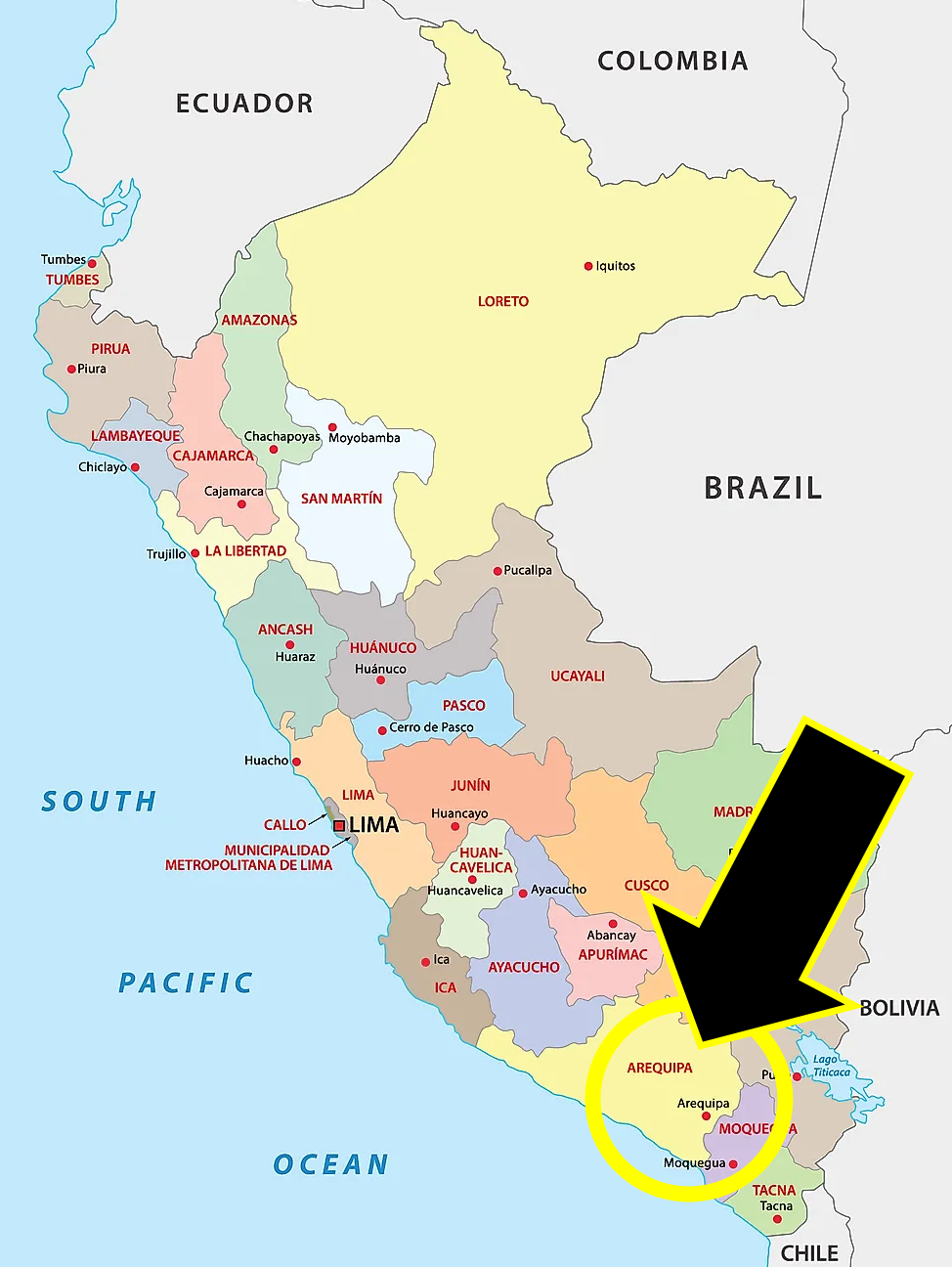 Arequipa is a region to watch. Whereas other Peruvian wine rowing regions, like Ica and Tacna, are likely to never produce a world-class wine barring some Moses-like miracle, Arequipa has most of the necessary requirements. Yes, it’s still a desert city, but has ample irrigation, stable climate, and less oppressive temperatures. There’s moving air, some elevation, and other beneficial elements that grape producers could use to their benefit.

The region suffers from the same Peruvian mentality that is holding back the country’s wine production: obsession with pisco. Yes, we get it: Peru can make great pisco. They literally invented the damn thing (sorry, Chile, but you know it’s true.) But because you’re great at one thing doesn’t mean you should never try to be simultaneously great at something else. It’s a cultural limitation that shows itself in nearly every aspect of Peruvian culture: they are not risk-takers. If you want to open a chicken restaurant, you must locate it next to 100 other chicken restaurants; you would never dare open a place where you might be the first, and thus grab market share. That sort of thinking just doesn’t exist in Peru. God forbid you should open a cevicheria next to a polleria.

And so Arequipa is still hampered by the tendency to retool pisco production houses to occasional wine-making. The good news is that unlike the pisco producers in Pisco, Ica or Tacna, Arequipa is having a better time of it. And, slowly, some wine-makers are thinking about prioritizing wine over pisco. And guess what? The ground didn’t open up and suck us all down to hell, after all.

The Paz-Soldán winery dates back to 1914, Google tells me. Ironically, the winery first began producing wines, not pisco, but later surrendered to national pride and pisco dominated its production schedules. I’ve had Paz-Soldán pisco, and it’s great.

But the winery’s founder, Prudencio Paz-Soldán, had already been importing grapes from Bordeaux France before he started making pisco, which is made from entirely different grapes.  Paz-Soldá brought Malbec, Cabernet Sauvignon, Merlot, Cabernet Franc, and Petit Verdot into Peru, with varying levels of success. The name “Burdeos” came from a mangled Spanish translation of the plural of “Bordeaux,” but has fallen generally into use as referring to Malbec. Without Peruvian regulation on the matte, however, some “burdeos” may have different grapes in them.

Paz-Soldán is located in the Vítor Valley of Arequipa, but some of this may be not fully accurate. My research, limited as it was, seems to suggest that Paz-Soldán uses grapes grown in various plots around Arequipa, not all of which may be in the Valley, and then processed and bottled in a single facility elsewhere in Arequipa. The “Bodega Paz-Soldán” is clearly located in a desert devoid of any growth, so the grapes are not being grown there. It does seem the wine production and pisco production happen in the same building.

For this bottle, however, the labeling assures us it’s pure Malbec, grown in the Vítor Valley. I tend to trust them on this.

The bottle under taste test here is the Conde de la Conquista Selecta “Ana Maria” Rosé Burdeos. That’s a mouthful, so let’s break it down. The “Conde de la Conquista” part means “Earl of Conquest,” and is the general branding used for Paz-Soldán’s wines (vs. their piscos.) The “Ana Maria” labeling is dedicated to Prudencio Paz-Soldán’s mother. The label also tells us that the wine only received four hours of maceration, thus leading to its pink color (vs. darker purple.)

The bottle’s glass was clear, with a neck seal of pure white.

The bottle included two stickers, one indicating that it had received 88 points in the “V Salon del Vino Peruano” competition, and another for a silver medal in Concurso Nacional del Vinos Peruanos, but the year of the concourse isn’t mentioned.

The rear label had some nice information on the wine, along with tasting notes. 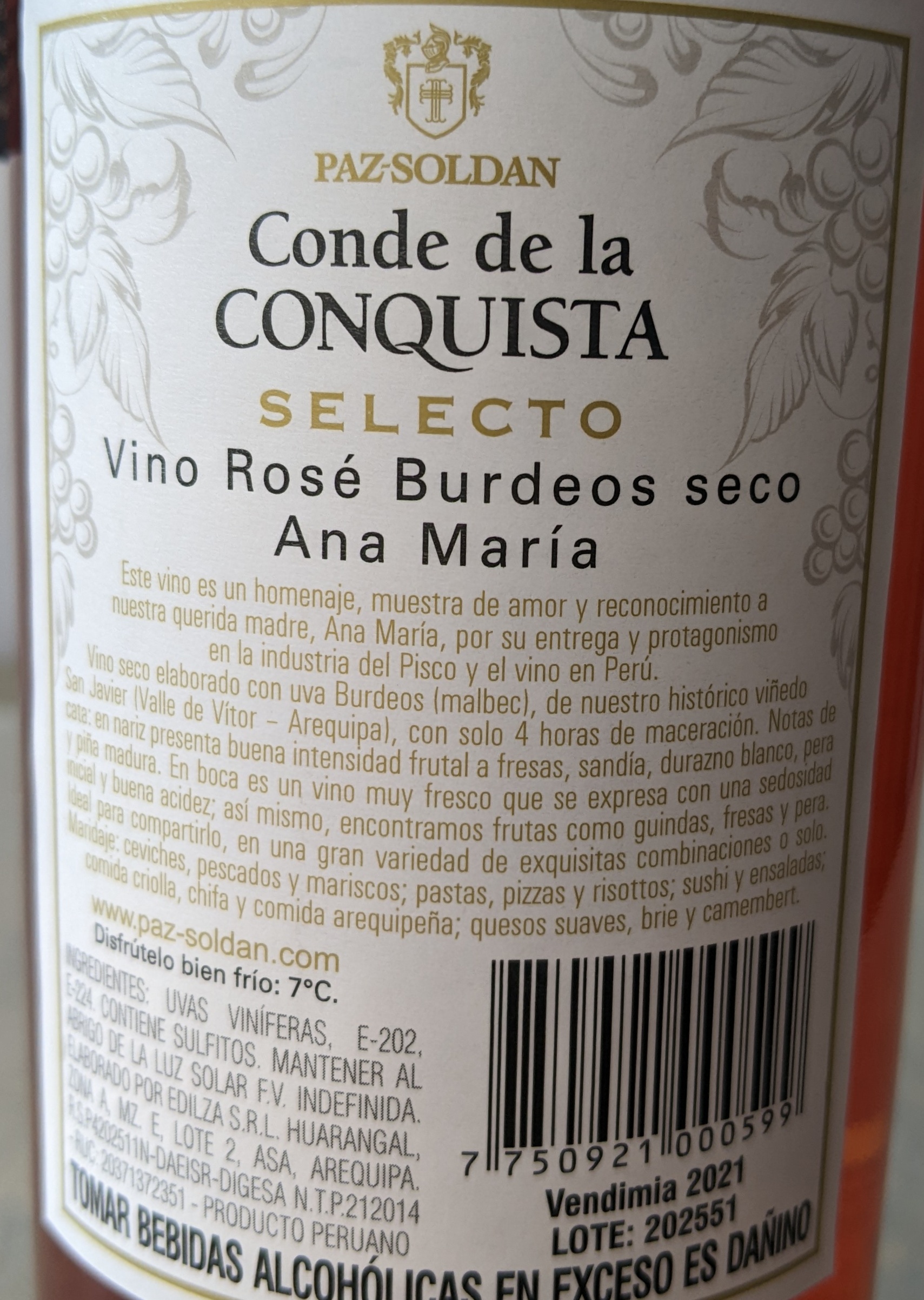 The neck was tightly sealed, and the foil opened normally. The cork proved to be a sugar cane alternative, a nice touch. Sugar cane closures are supposed to be more recyclable and generally less impactful on the environment than cork, and certainly more than synthetics. The cork popped out without incident.

A really nice touch was how the bottle arrived with identification cards on the neck; this hints that Paz-Soldán is serious about having people put their wine through its paces.

I used a slightly smaller red wine glass, but to be honest I may not know what I’m doing with rosés. My gut is just to treat them more like reds than whites, and let them get more air.

There was no sediment, and the color was pleasing to be sure. Bright pink, darker than a traditional rosé, and closer to the red side of pink. The glass showed significant legs, to be expected for the 13% alcohol level this glass was packing. 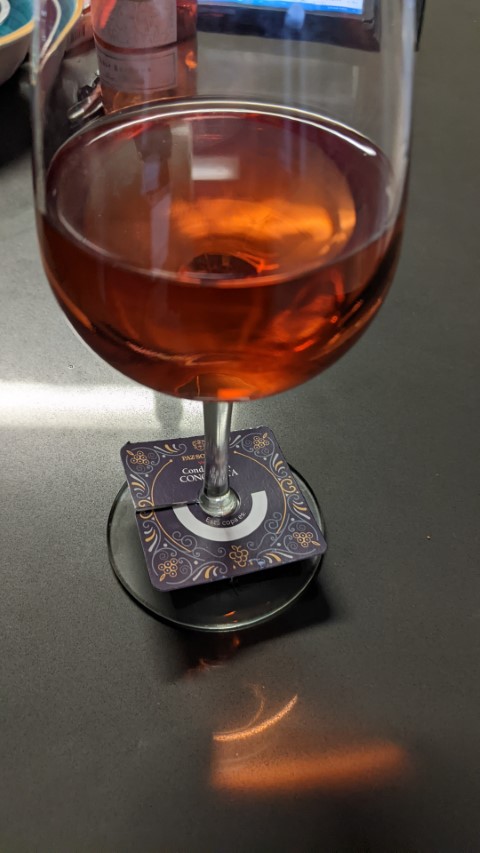 The nose was a strange mix of baked apple, steel, and pebble. I know that’s not particularly helpful, but it’s what I sensed. Again, I’m no expert in rosés, and find them confusing. I was reliably confused yet again.

My puppy, Maui, helped me with the nose test, and he said it was just fine. 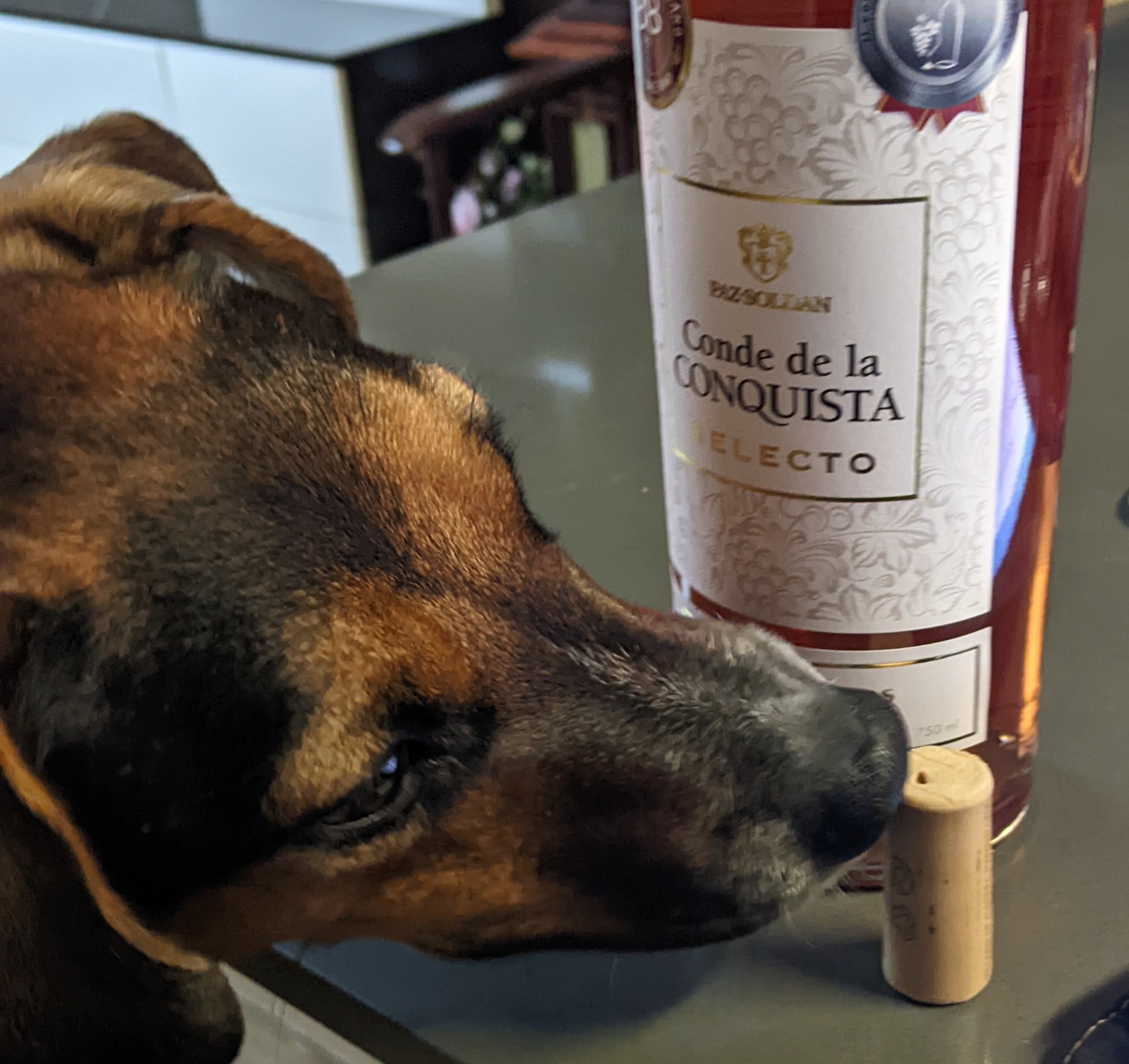 Well, things got easier once it was in my mouth. Now the flavors provided a much clearer picture: strawberry, a bit of cherry, and unmistakable cranberry. In retrospect, the cranberry was probably what I was smelling, but I just wasn’t used to that in a wine.  The finish was long, and cherry took over here.

Revisiting the bottle next day showed no changes at all, and was just as fresh as when I first opened it. Again, cranberry and cherry notes dominated. Sugar levels are moderate, and this is still a dry wine, so you won’t find cough syrup here. I tasted it by itself and then paired with some cheese (queso blanco) and crackers, and went equally well. I’m not sure how this will hold up against any powerful meal, and so definitely suggest you pair this with either something light, or nothing at all.

I shared glasses with others at the table, and they enjoyed it, too. The others all prefer sweet wines, so getting any positive comments on a dry wine was nothing less than miraculous.

Overall, this was a hit. If I had to come up with negatives, it’s perhaps a bit too acidic (the cranberry notes are tart), and could use more balance with the sugar.