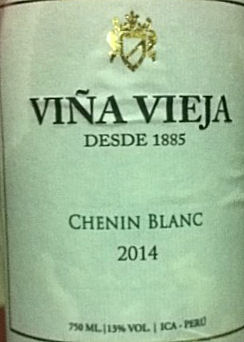 Peru is not a country known for its honesty in quality control, although it’s much improved than, say, 20 years ago. But it wouldn’t be at all out of place for one of the vineyards of Ica to throw in some apple juice or maple syrup into the vats, bottle it and call it a gran cuvée. It’s not like the government is paying attention.

So when I sipped a bit of Viña Vieja Chenin Blanc 2014 and found it not only good, but really good, my first reaction wasn’t to declare I had found a great new wine; instead, it was “whose wine are they relabeling?”

Peru isn’t blessed with the greatest terroir for wine; the primary wine growing region of Ica is dry and dusty and the vines look like anorexic pipe cleaners wrapped on poles. There are a few wineries who have mastered the brujería necessary to produce a decent bottle or two, but they aren’t common. To consider that some Peruvian vineyard managed to not only get the sometimes fussy chenin blanc to behave, but managed to make a spectacular tasting wine out of it, is pushing the boundaries of credibility.

Specifically, this bottle comes from Agrícola Viña Vieja Viña Santa Isabel SAC, based in Ica. If we trust the label, the chenin blanc is a “young wine” (despite the “Old Vine” brand name) with fruity aromas characteristic of peach. For me, it was a fantastic and aromatic wine, full of fruit but more on the tangy melon end of the spectrum, with a light fizz and high alcohol. Very low acidity, it stood up to a typical Peruvian meal of arroz chaufa (Peruvian / Chinese fusion rice) as well as a chocolate dessert. Later in the evening, it was still being drunk as a nightcap, and no one was complaining. To put it simply, it is a fantastic wine, drinkable under all circumstances.

So how in the heck did it come from a company that has already been fined by Peru’s regulators for selling another alcoholic drink — Peru’s beloved pisco — under false labeling? And how is that same company also selling Malbec and Merlot blends? Where are they hiding all those grapes? The fact that their Facebook page only features a video of some automated bottling and labeling machines gives one pause. Where are the vines?

My gut — which is rather happy from having drunk the Chenin Blanc, by the way — nevertheless tells me they are either a negociant rebottler, or just really good at making labels that can say anything. I’m not 100% sure I know what is in the bottle, and without going to the winery personally I won’t be convinced that something funny isn’t up, but damn it’s tasty. So it gets my recommendation, and it’s worth seeking out, if you don’t care about the fact that you might be drinking some kind of weirdo, Peruvian mafia counterfeit.