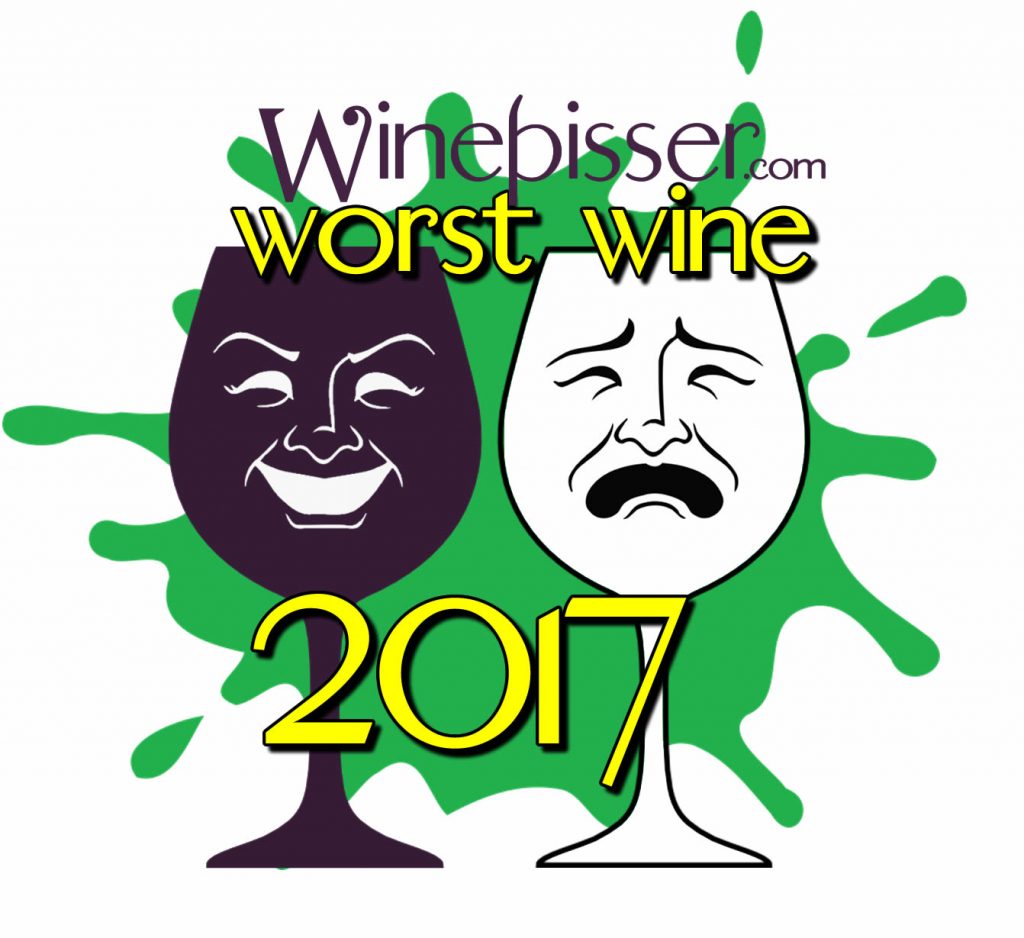 For the past two years, Winepisser has reveled in its negative reviews of wines — hell, snark is in our site’s name — but we hadn’t given the really terrible wines their due at the end of the year, during award season. This year we launch a new tradition: the annual Winepisser Worst Wine Award.

For 2017, I’m happy to announce — and I mean that, I am happy to, since this wine totally deserves all the bile and revulsion one can muster — that the 2017 Winepisser Worst Wine Award goes to Franclin Delgado Castilla Cavas de Caral 2015 from Peru.

First of all, it’s no confidence builder when you can’t be sure the label on the wine is even spelled right. The 2015 bottle I had was — or at least I could swear from memory it was — spelled “Franclin Delgado.” But no search results come up for it, spelled that way. Instead, import records from Peruvian searches show something called Flanklin Delgado, and others still Franklin. So who knows what the hell it’s called, but we do know the war criminals who make this stuff have a Facebook page, anyway.

You know you have a horrible wine if everyone at the wedding where it’s served chooses to remain totally sober, rather than touch the stuff. That’s where I encountered this filth-laden basura, at a wedding in downtown Lima. When I smelled it, I thought someone had just rubbed the glass in horse shit. I checked… that smell was coming from the bottle, not the glass. I looked around: sure enough, people were scrunching their noses, and entire bottles of the stuff sat untouched … for the entire evening! A friend of mine, a Peruvian attorney and wine snob, drank it, but it was his sister’s wedding and I suspect he didn’t want to insult the bride’s father for apparently buying wine from a horse stable, rather than a liquor store.

I am not kidding. The reek of this wine was a combination of gasoline and horse shit. It was the only wine that ranked a 0.5 in my reviews all year, and possibly the only one that got ranked that low… ever.

It’s not a surprise this comes from Peru, mind you. Peru just doesn’t seem to get it; they have a few limited areas with promising terroir, but the people here seem to be utterly clueless on winemaking, and the citizenry are just not wine-aware enough to care. The level of average wine knowledge in Peru goes like this: “sweet wines are for women, dry wines are for men.” And then the men drink all the sweet wine anyway. And, by the way, Boone’s Farm is sold as a “dry import” here in Peru.

Peru isn’t all horrible, though, and shows some promise. A chenin blanc from Ica won five stars last year, and remains in my wine cooler as the standby white to serve for friends and family who may not be too fussy. I love the stuff, even though I do suspect it’s being bottled for Peru, and not necessarily grown here.

I’m not sure what it will take to bring Peru up to speed with even 2nd tier wine producing nations, and it’s frustrating since we have Chile, Argentina and Uruguay so close as neighbors. But for now, Peru is a producer of largely junk wines. The pisco’s good, at least.

Runners up for Worst Wine included the horrid Canyon Road Cabernet Sauvignon 2015, which I said was like “mule urine”;  a Château Baulac Dodijos Sauternes 2012, which I said tasted like your dad’s old photochemicals; Bodegas Santa Ana Caracter Shiraz-Malbec 2016, which tasted like “acid mixed with carcass”; and Apothic White, which I said tasted like “artificial banana cream cakes they sell in all night gas stations, but liquefied and then poured directly into your mouth.” That last one was ironic since Apothic Red won 2015’s Winepisser Best Wine Award; it was a short year. Those runners-up all netted a full star, at least, whereas the Cavas de Caral couldn’t even muster that.

If you want to pull the worst prank ever on someone, especially your wine snob pals, serve them Cavas de Caral. They may hate you — hell, they may murder you in your sleep! — but it would be worth it. It’s that terrible.